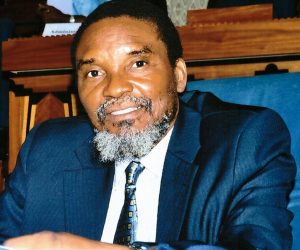 Dr. Sc in 1992 from catholic University of Louvain in Belgium, Mahouton Norbert Hounkonnou  is a full Professor of Mathematics and Physics at the University of Abomey-Calavi, Benin Republic. His works deal with noncommutative and nonlinear mathematics including differential equations, operator theory, coherent states, quantization techniques, orthogonal polynomials, special functions, graph theory, nonassociative algebras, nonlinear systems, noncommutative field theories and geometric methods in Physics. He authored and reviewed  books. Further, he refereed and served as an associate editor for renowned journals in mathematics and mathematical physics. He  published over 200 main research papers in outstanding ISI-ranked peer reviewed journals  and international conference proceedings in the fields of mathematics and mathematical physics. He is a visiting professor at African, Asian, European and North American Universities. Together with his peers at the international level, he founded the International Chair in Mathematical Physics and Applications (ICMPA – UNESCO Chair) of the University of Abomey-Calavi where he  created  multi-university master degree and PhD programmes in mathematics with connections, motivations or applications to physics, and in physics with  important relations to mathematics. The best African students from over 13 French and English speaking countries are selected to follow these graduate programs which attract prominent and  leading mathematicians and mathematical physicists worldwide who come to give lectures and supervise students research, what has substantially increased international collaboration with African, Asian, American, European and Indian mathematicians. The ICMPA-UNESCO Chair presently hosts the international conference and  school series on Contemporary Problems in Mathematical Physics, which are held every two years and each year since 1999  and 2005, respectively. These activities have led to  a significant network of researchers connected with the ICMPA-UNESCO Chair, that benefits from the resources  available in mathematics and mathematical physics in Africa. Professor Hounkonnou supervised  34 PhDs and 38 M. Sc.  students from various countries including Belgium, Benin,  Burkina-Faso, Burundi, Cameroun, Democratic Republic of Congo, Niger, Nigeria, Senegal,  Togo, Zambia, etc. Professor Hounkonnou was awarded a series of recognitions for the excellency of his work such as the Prize of the Third World Academy of Sciences (TWAS) in 1996, the Tokyo University of Science President Award in 2015, and the 2016 World Academy of Sciences C. N. R. Rao Prize for Scientific Research ”for his incisive work on noncommutative and nonlinear mathematics and his contributions to world-class mathematics education”. He was a member of UNESCO Scientific Board for International Basic Sciences Programme (IBSP),  NANUM 2014 Award Committee Member of the International Congress of Mathematicians (ICM 2014) as reviewer for region Africa, and member of the InterAcademy Partnership working group on Harnessing Science, Engineering and Medicine to Address Africa’s Challenges.   He is TWAS research Professor in Zambia, the chair of the African Academy of Sciences Commission on Pan-African Sciences Olympiad (2014 – present), chair of the African Academy of Sciences Membership Advisory Committee (MAC) on Mathematical Sciences (2013 – present).

Professor Hounkonnou is  the co-chair of the network of African, European and Mediterranean Academies for Science Education (AEMASE III). He is the current President of the Benin National Academy of Sciences, Arts and Letters. His membership extends to the International Association of Mathematical Physics, American Mathematical Society, London Mathematical Society, Society for Industrial and Applied Mathematics (SIAM), African Academy of Sciences (AAS),  The World Academy of Sciences (TWAS),  Scientific Council of the Centre International de Mathématiques Pures et Appliquées  (CIMPA), Scientific Committee of the International Centre for Advanced Training and Research in Physics (CIFRA, Magurele-Bucharest, Romania), as well as other scientific organizations.  Professor Hounkonnou is a Knight of the Benin National Order (Chevalier de l’Ordre National du Benin).